Since 1972, New England Village (NEV) has supported adults with intellectual and developmental disabilities in Pembroke, Massachusetts, and beyond. What started as a small campus-based residential program serving thirteen people has evolved to include seventeen group homes, multiple day programs, and a wellness center that welcomes people of all abilities.

As the organization grew and diversified its offerings and locations, it battled a decades-old misperception of being an insular community. It became challenging to communicate the quality and value of their work when faced with this bias. Under new leadership in 2021, NEV decided to explore whether a rebrand would help. 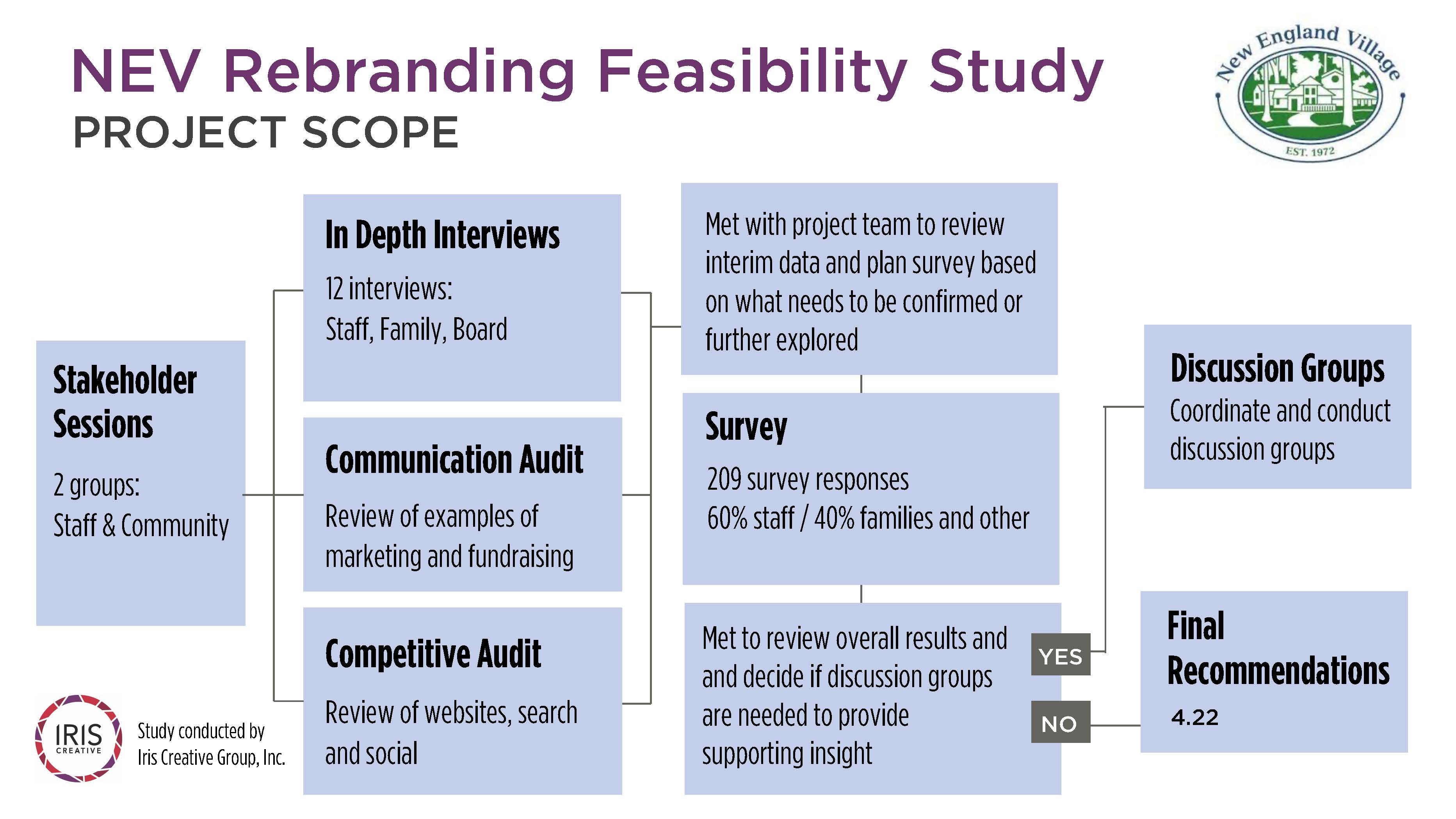 NEV engaged Iris to use our AMIE methodology for a Rebranding Feasibility Study. The AMIE method of brand focus aligns Audience, Message, Image and Experience.

We began by identifying two groups for stakeholder sessions. In most cases it’s best to have everyone together, but NEV’s staff were expected to be a critical audience and separating them into their own group allowed for more participation and better comparison against the second group of family, board and community members.

We then invited people who met our criteria for “Lovers” and “Likers” of the organization to be interviewed. Allowing us to explore the points that came up in the Stakeholders sessions and ask follow up questions. We analyzed their responses and compared them to the Stakeholders to show us what ideas were building consensus and where there was divergence. We then took these points and surveyed the full organization list to test this input against a larger, but still involved audience.

Along the way, we conducted a communication audit to evaluate current marketing and fundraising as well as a competitive audit to see how NEV shows up online against other options for the service they provide.

“Having worked with so many consultants before, Beth was terrific. She made it so easy to make a decision on how to move forward”, noted Dolores Rezendes, Chief Development & Communications Officer.

We went into the project with the goal of determining whether:

1. Nothing needs to change related to the brand.
2. There are any tactical changes needed in naming, logo or overall design that would benefit from updating.
3. There are opportunities for strategic change to audience, brand position, messaging or experience that the process of rebranding could facilitate.

Ultimately the research revealed that, despite the grant funders current perspective on residential living, this community knows who they are and why their model works. The idea of a “village” is not literal to them. They believe “it takes a village.”

The main problem, most agreed, wasn’t the name. It was that they had outgrown their logo. 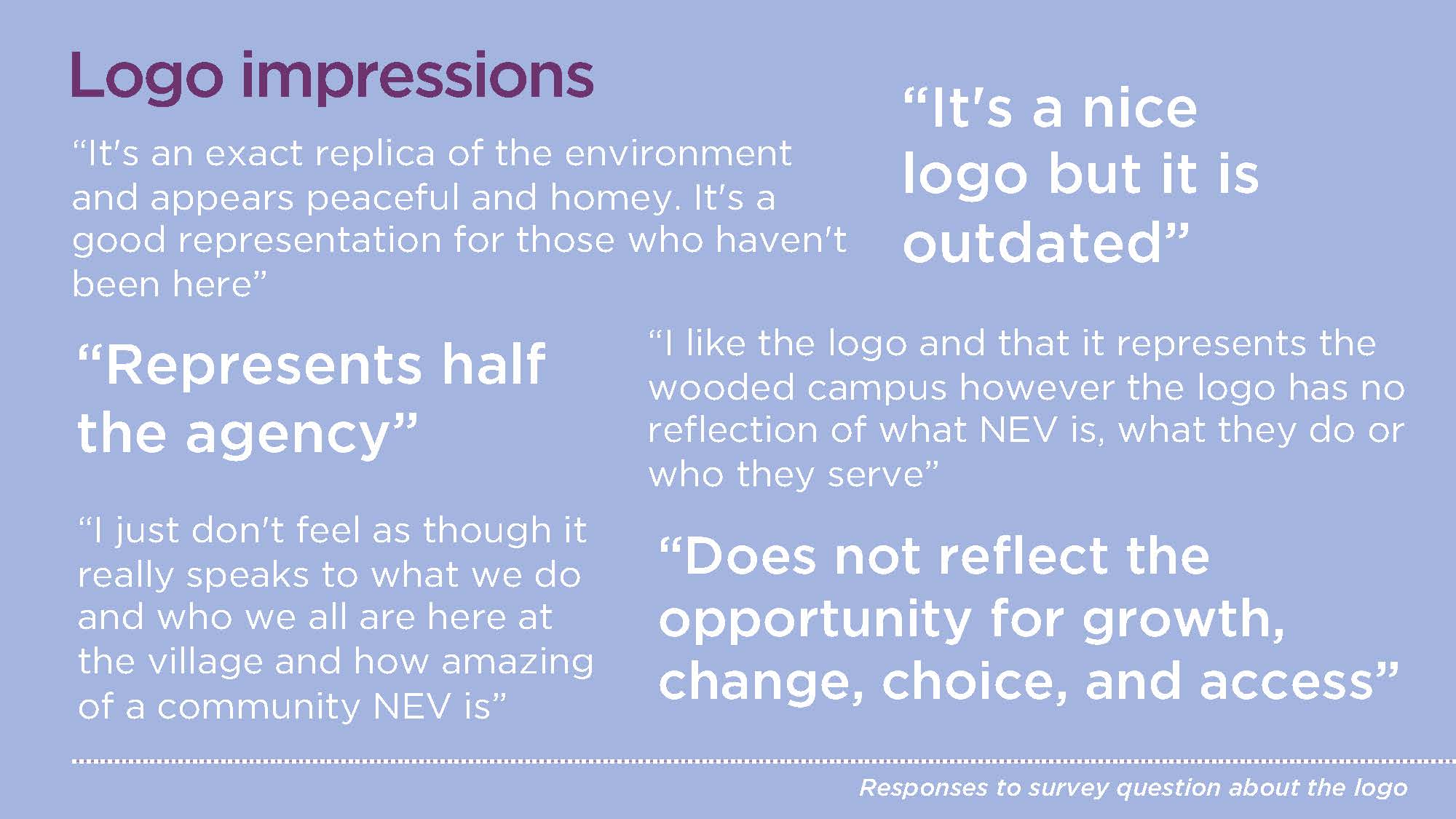 The Brand Feasibility Study assessed the brand today and identified the root of NEV’s challenges along with the best way to address them and create new opportunities. Researching and evaluating where your brand stands today, doesn’t always mean rebrand or even a brand identity shift will be needed. But it provides solid evidence to make sure that the project you choose to do is the right one for you right now.

We developed a logo and tagline to align with their future strategy.

We began by inviting key staff members to a tagline workshop to help us best understand their perspective on the organization and who it serves. The conversation started with a larger, overview conversation. We then separated everyone into small groups to develop their own taglines that were then presented and discussed. We analyzed the set of ideas and narrowed them down to just a few that were then ultimately decided on by the project leaders.

After a deep discussion, the words that came up in the working session continued to resonate with the NEV team – people, purpose and passion.

Once we had a tagline, we could use the knowledge we learned to develop a logo. We wanted the logo to represent everything that the organization is through one symbol. 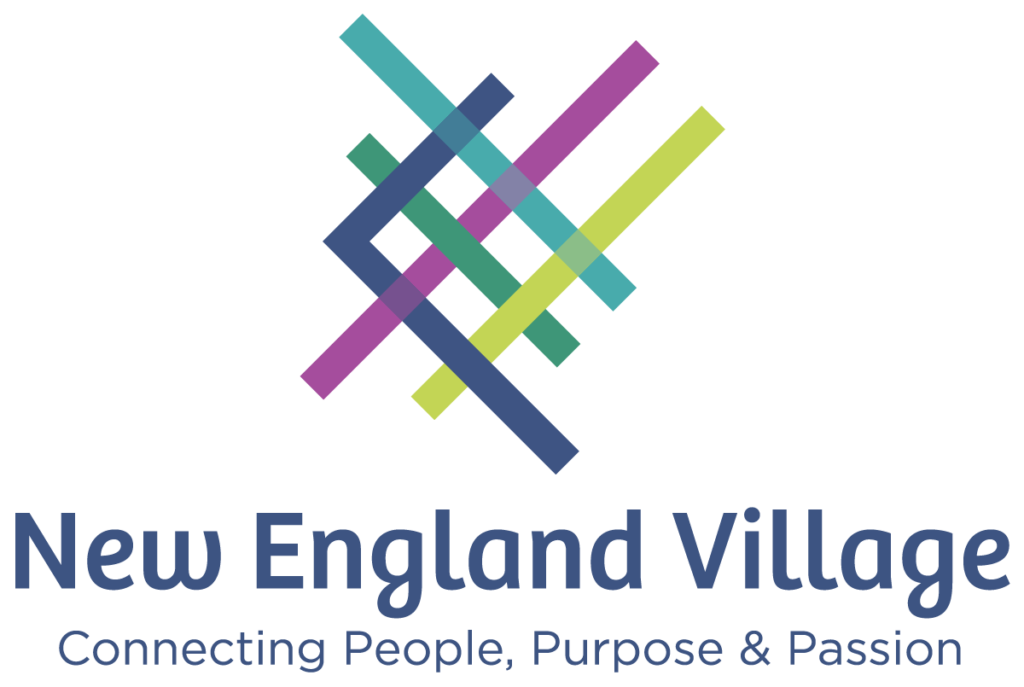 The final logo design represents the interconnectedness of the NEV community, an idea that was significant in the creative brief and tagline discussions. The ribbons are different colors to highlight inclusiveness and diversity coming together. The lines break the frame shooting out in various directions rather than being contained in a shape in any way. The idea of weaving together also communicates that NEV is more than the sum of its parts, stronger together.

This design is intended to bring in the ideas of growth and innovation. It also conveys the message of going beyond the borders, which was a complaint about the old logo. The design creates dynamic movement while still being constructed of simple easy to reproduce shapes. It is intended to feel like opportunity, growth, and choices while having a solid home base.

The AMIE process goes so much deeper than a graphic design project.

CEO Stephanie Costa remarked “I was shocked at how much I was able to gain operationally from the process. We learned things I can address in areas well beyond marketing.”

How Can We Help?