Online campaigns have become a valuable tool for nonprofit fundraising. But they’re powerful for engaging current audiences and attracting new people. Online campaigns provide a focus to social media activity and act to rally supporters towards reaching a short-term goal.

Which is why the way you brand your online campaign matters.

At Iris Creative, we believe it’s critical that your online campaign’s brand serves as an extension of your organization’s primary brand for maximum effectiveness. At the same time, your online campaign should stand out as a unique and discreet effort in order to create a sense of urgency.

Located in East Fairmount Park in Philadelphia, Smith has been a treasured childhood destination for over 100 years and strives to be the city’s foremost resource for play by providing opportunities for unstructured creative play for children 10 and younger.

Smith had just finished an $8.5M renovation to improve the indoor play spaces in its historic house. After successfully completing the project, Smith wanted to bring awareness about the effort to a wider audience with a week-long online giving campaign, driven by a $28,000 two-to-one matching gift from its board.

With a large campaign and significant project ending, we wanted to showcase what can be accomplished — while also reminding people that the work is never done. To communicate this, we landed on the theme “Play It Forward.” For the logo and visuals, we started with Smith’s brand colors, added a yellow and a youthful font, giving the campaign its own look that complemented its primary logo. 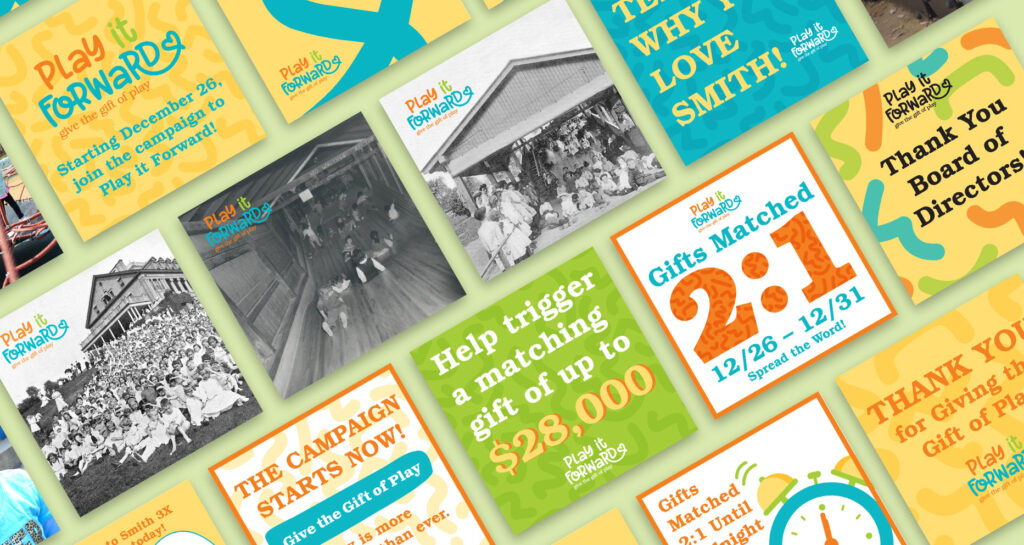 The graphics we designed for social media posts made use of historical and current photos to reinforce the idea of enhancing play for future generations. Finally, we made sure everything had a playful style, in keeping with Smith’s mission.

Along with a branded look and logo, social media graphics, and a website banner, we provided Smith with ambassador and board toolkits to engage their most involved stakeholders in the effort. The toolkits included post copy and branded graphics, as well as instructions about what to post or email and when. Ambassadors and board members were also encouraged to comment on and reshare Smith’s posts, to generate their own videos in response to prompts that were provided, and to post their own thoughts, photos and memories.

Extending your brand, like we did with Smith’s Play It Forward campaign, makes your online campaign more than just fundraiser. It turns your campaign into an effort that ties the idea of giving into your existing brand. (And by the way, it wasn’t bad for Smith’s bottom line either. Not only did Smith’s donors unlock the trustees’ full $28,000 matching gift, the campaign exceeded its fundraising goal by 35%, raising more than $51,320 total!)

Have an online campaign coming up? Let’s chat about how you can make it a brand booster as well as a fundraiser. Give us a call at 267-468-7949 or drop us a line at info@iriscreative.com.

What’s in a Name?

Anniversaries: Make the Most of Your Big Moment

Surprising Insights You Get When You Ask the Right Way