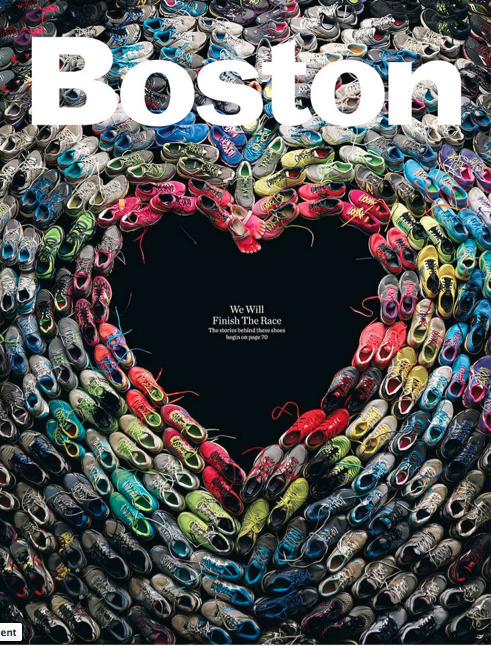 The power of visual communication is not limited to online. Beautiful. Simple. Emotional. Authentic. Memorable. Boston Magazine’s May 2013 cover is a perfect example of connected content.

The cover of the issue shows a gorgeous image of a heart created from actual shoes worn by runners. This image has amazing visual impact on its own do to its flawless execution of color and photography. But they didn’t stop at a beautiful image.

Boston magazine actually created the image from real shoes worn at the marathon, which changes the image into almost a memorial of its own.

The shoes used in the art translate into actual stories of the donors of people who are part of both the event and the creation of the art. So visual content evolves into written content, creating new opportunities to deepen the interaction. Boston Magazine then does a beautiful job on its blog explaining the backstory of how the idea came together, creating a new story and more content to share. In the article, John Wolfson, Editor in Chief, shares how the staff used their social networks on Facebook and Twitter to ask for help collecting shoes. When shooting the main image they took the extra time to shoot each pair of shoes individually, knowing that what wouldn’t fit into print could be used online.

This magazine will arrive in the mailboxes of thousands of Bostonians next week. Today, this cover will be seen by millions or more online before the the publication is even off the presses. I had never seen an issue of Boston Magazine before this morning and I wasn’t searching for it. But, probably like you, someone shared it with me and now we are talking about it.

So I did a quick Google search experiment and within hours of posting:

“Boston Magazine Shoes from Marathon” found 57,300,000 results and was four out of ten images in the first results of images.

No one wishes for tragedy to be the foundation of their marketing cycle, but when disasters happen there is an opportunity to get important messages in front of people who care. How many more people will give to support the victims, to end terrorism, to control weapons, to help amputees? How many more will put their own running shoes on and run in local races that support countless causes because they were moved by this project?

The response to this image does not surprise me. That requests are pouring in for posters and that the magazine has decided to use that interest to send donations to The One Fund—Boston says something even greater.

When you think of how to spread the message of your organization through content, think about everything you can do. Don’t just let a picture be a one-off when it can spark a content cycle that extends your story father than you could ever expect.

Turn Your Stories Into Solutions