During last year’s Super Bowl there was one ad that set the bar for advertising in 2014.

It was from Oreo. And it wasn’t their TV ad, but one clever quip on social media about the stadium’s power outage. This resulted in 10,000 reTweets in one hour plus a sizeable bite of free media coverage, in addition to their paid TV spot. 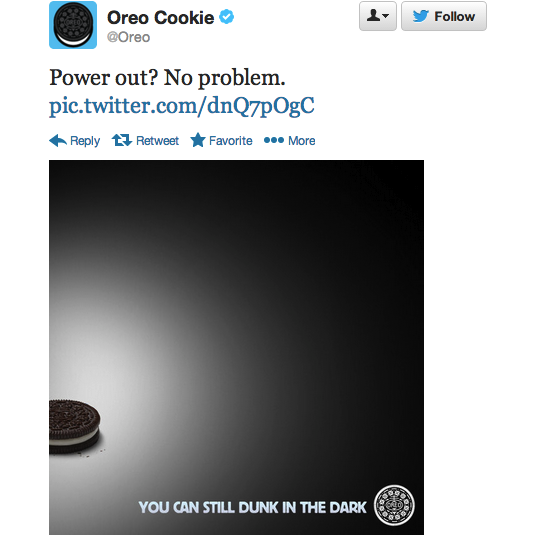 It worked because it was unexpected, witty, and hyper-relevant. A perfect example of Real Time Marketing – using social media to newsjack major national events as they happen.

This year advertisers jumped right on the social bandwagon, trying to recreate Oreo’s success with that one memorable comment. 50% of the Big Game’s TV commercials actively encouraged viewers to Tweet their brands during the game. And brands that didn’t have TV commercials piggy-backed on others to create their own social buzz. It’s clear that advertisers have stepped up their game in Big Game advertising.

Here are 8 of the top social moments from last night’s big event.

Tide Laundry detergent Tweeted a series of video replies to some of the major TV commercials. It was a surprising and witty tactic the first time, as they responded to Chevrolet’s TV ‘cow’ commercial with a reminder of how messy beef can be. But after a while their clips were predictable and the gimmick ran thin. Tide tried to pre-schedule a social buzz according to TV, so lacked the true spontaneity that Real Time Marketing needs. Sorry Tide, you didn’t make any waves here.

Cover Girl did a good job of knowing their audience, being relevant and staying spontaneous. Their photos and videos weren’t as professional as Tide’s, which made their social campaign feel much more genuine. It really seemed like a group of ‘girls next door’ were watching the game, having fun and making it up as the game progressed. Not one for the guys – but it was cute,  fun and fit with Cover Girl’s image.

Talking about having fun and making it up along the way: We’re not sure what JCPenney’s social media team was doing during the game and something tells us – neither were they. Luckily they managed to save themselves from what looked like an embarrassing error from a ‘happy’ social media staffer!

Tide wasn’t the only one being social with other brands last night. It seemed like everyone was trying to piggy-back on other brands’ social capital.

Even Hillary Clinton got in on the act.

Local Philly cheesesteak purveyors and the Philadelphia tourist board made the most of an appearance in a targeted insurance ad.

The only brand that really achieved a true ‘Oreo’ moment was Heinz with this halftime graphic. Which is just as well, because their TV spot (only their second Super Bowl TV ad ever) wasn’t very memorable.

PBS made it clear that while it wasn’t trying to compete with the drama of the Big Game, it was aiming for second place in the ratings. So when the Big Game itself proved less than dramatic, PBS found an opportunity to promote its own headlines dramas, as even engaged with its viewers.

In their TV commercial esurance managed to provide viewers a very good reason to get on social media and start Tweeting. By purchasing the first ad space after the game esurance say they saved $1.5m – which they want to give to one lucky Tweeter. Their hashtag #esurancesave30 rocketed to the top of Twitter’s trending list within seconds (it’s still there), and their list of followers grew by over 100,000 people, all hoping to grab the single cash prize.

And where was Oreo during the Big Game?

Surprisingly, they were offline.

And with a simple, inexpensive reminder of their social success from last year, they still ended up in the news.

This is maybe the biggest lesson in newsjacking with social content. Great content is memorable. It’s helpful to know when your content is most likely to reach its audience, and when it will just get lost with everything else.

What were your most memorable moments from this year’s Big Game?

What’s in a Name?

Anniversaries: Make the Most of Your Big Moment